How does chimpanzee behave? 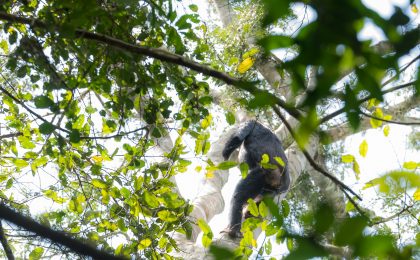 How does chimpanzee behave? Facts about chimpanzees Cultures

Chimpanzees are social animals, this means that they like to be with others. They live in groups of about 20 to 100 members. These groups are called communities there are one dominant male. He is the one with decided how to divide up meat from a hunt among the group members. The rest of the group consist of other males, females and young chimps. How does chimpanzee behave?

A community usually stays within its own area, known as its home range. The size of the range depends on where the chimps live. In certain forest, it may be only few square miles. In the savannah, it may be hundreds of square miles.

The social life of chimps – facts about chimpanzees behavior

Chimps have as varied a social life as human. The members of the community will play, fight, bully and make friend show tenderness.

Grooming is the chimps most important social activity. It helps chimps’ bond with each other calm down when they are upset. It’s also a way to figure out a role in the group. Grooming can be a way to show who is dominant. Males groom each other more often than females do.

Chimpanzees usually gets along with members of their own group, but they can sometimes be violent. They may attack other chimps that wander into their range. They are unusual in this respect, as most primates do not band together to kill. In fact, the only other primates that behaved this way are human.

Chimps have different ways to get around, they tend to rely far more on their arms for movement than humans do. They walk using the knuckles of their hands for support against the ground. This is called knucklewalking. They also swing through the trees from branch to branches using their hands and arms.

Chimps have different ways of communicating with each other. They use facial expression to show their emotions. They open their mouths slightly when they feel relaxed or playful. They put their lips to beg for food. When they attack, they bare their teeth with their mouths wide open. They also enjoy physical contact with each other such as kissing, tickling, touching hands and hugging.

Chimps do not talk the humans do, but they do make noise called vocalization. The typical chimp sound is a call known as pant hoot. Roar, and make other sounds. When trying to communicate with a chimp or group far away, chimps drum may drum on trees. Excited males stamp the ground and scream.

How intelligent are chimpanzees?

Chimpanzees are very intelligent. They can solve problems, they observe the world around them and take in information. They have a good memory of the places where they have found food before. They also find new food sources by watching the behavior of birds and others primates.

Like humans, chimpanzee is able to recognized themselves. The have self-awareness. This means that they know that they are separate from the world around them.

Chimps spend a lot of time communicating with each other. A chimp will watch another chimps face closely to figure out how its feeling. Chimpanzee are capable of doing many things that other animals cannot do. In the 1970s scientist were able to teach some chimps how to use sign language.

Sign language is used by deaf people to communicate with others, by using hand and body movements. Chimps who were taught how to sign could communicate very complex ideas to their human handlers.

Tools – How does chimpanzee behave?

Like humans, chimps have opposable thumbs. Having opposable thumbs is very important for tool use, because it means that it is possible to grasp things in the hand. This ability helps chimps to do all sorts of things, including using ng tools, gathering food, grooming one another, and grabbing onto branches and vines. Chimps are among the few kinds of animals that can use tools.

Young chimps learn tool use from watching adult chimps. Then they practice on their own. Many tools are used for hunting and eating food chimps in west Africa use stones to mash open nuts. They place the nuts on flat rock or tree stump. Smashing the hard shell releases the tasty nut meat.

Drinking and bathing – How does chimpanzee behave?

Chimps use leaves to scoop up water from rivers or stream. Then they spoon the water into their mouths. Sometimes they use these leaf scoops to get at water deep inside trees. They also use leaves to wipe their mouth and other body parts. All these behaviors are examples of tool use.

How does chimpanzee behave? – Fishing for insects

Both in the wild and in captivity, chimps’ fish for ants and termites. They use long, thin branches or stalks to poke into ant or termites’ nests. When they pull out the branch, it is covered with ants. Then they can gobble up this tasty snack!

What threats do chimpanzees face?

Chimpanzees are amazing intelligent animals. Sadly, they are also endangered and are at risk of becoming extinct. At one time, there were as many as one million chimpanzees in Africa. Today, there may be as few as 150,000 chimps left in the wild.

Risks to Chimpanzees in the wild – How does chimpanzee behave?

One major reason chimpanzee is dying out is habitat loss. People have taken over woodland and rain forest areas that were once home to chimps. They cut down the trees and use the land for farming, roads and houses. This forces chimps to move into new areas or to live in smaller areas. With less land, it is hard for them to find enough food.

Chimps are also at risk from poaching (illegal hunting). People hunt and trap the wild chimpanzees to sell to zoos or as pets. Sometimes people hunt chimps for their meat. The meat of wild animals is called bushmeat. The people who hunt chimps for bush meat need the money they earn from selling it, and they need to feed their families, too. This makes it a difficult issue to deal with.

Another risk to chimps is a disease, chimpanzees can become very sick from some of the same diseases that affect humans, such as HIV, COVID-19 and the Ebola virus. When people get close to chimp habitats, they can pass on deadly diseases.

In the past, scientist has experimented on chimps. Their similarity to humans made them useful test subjects. Over time, many people began to believe this was wrong. Harming these intelligent creatures seemed cruel. Today, most countries no longer allow experiments on chimpanzees.